Welcome to a new luxury experience.  WGC is an iconic “skyrise” in the heart of vibrant downtown LA.  As the premier address in Los Angeles, WGC boasts the most innovative design and technology. The building’s modern architecture mirrors the curvature of Yosemite’s half dome while luminating the light of the city’s bright skies. 360-degree views from the 73rd level Skydeck provide a stylish getaway from the traditional office space and will surely take your breath away.

Wilshire Grand Center rises proudly in the city’s urban center where people meet, work, and stay. The 2.1 million SF center blends retail, chic restaurants, seventeen floors of office space, and the renowned InterContinental Hotel into one of the liveliest spots around. The picturesque courtyard complete with serene water features creates an ambience like no other. Situated in the heart of the Central Business District, Wilshire Grand is conveniently located near public transportation hubs like the 7th street metro station, bike share, I-110 freeway, and the future LA Streetcar.  WGC is also adjacent to an eclectic collection of retail, theater, and cultural venues as well as an easy walk to the Staples Center and local nightlife.

Designed to be the ultimate workplace of the future, the building is LEED certified and is equipped with bike storage and showers, thermal energy storage, backup generator pads, LED lighting, and technology to optimize oxygen, light, and acoustic levels. Office spaces average about 22,000 SF and are easily accessed through a separate lobby entrance by way of high-speed double-decker elevators. Tenants are granted access to hotel amenities, including a fitness center where memberships are available, multiple conference centers and meeting rooms of all sizes.

Cushman & Wakefield’s John C. Cushman, III, says of the Wilshire Grand Center, “This building is going to go down as one of the great architectural masterpieces that has been created by any architect in any city.” 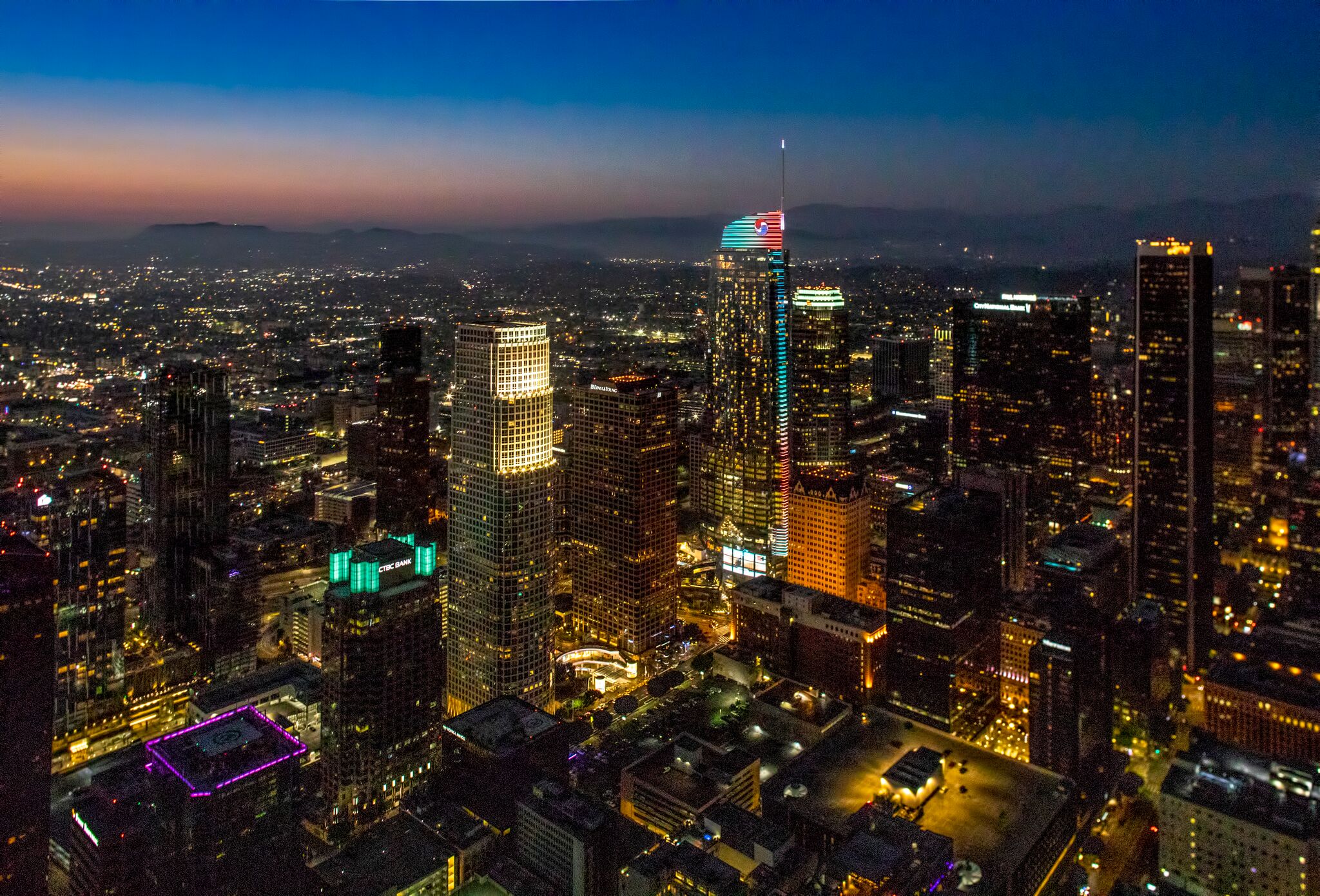 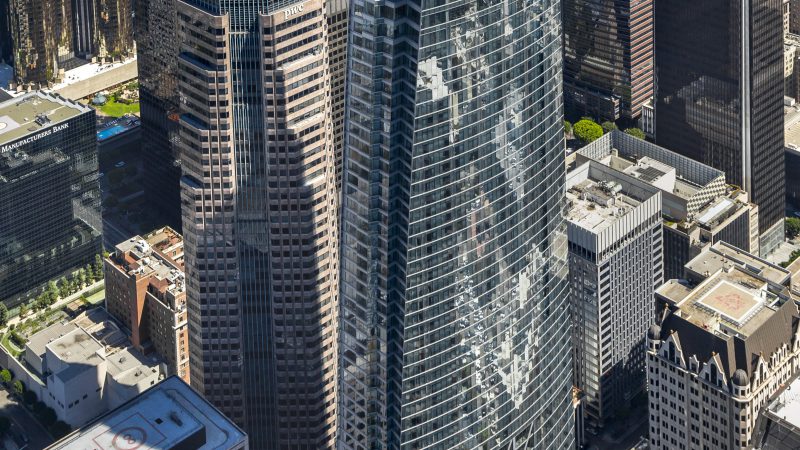 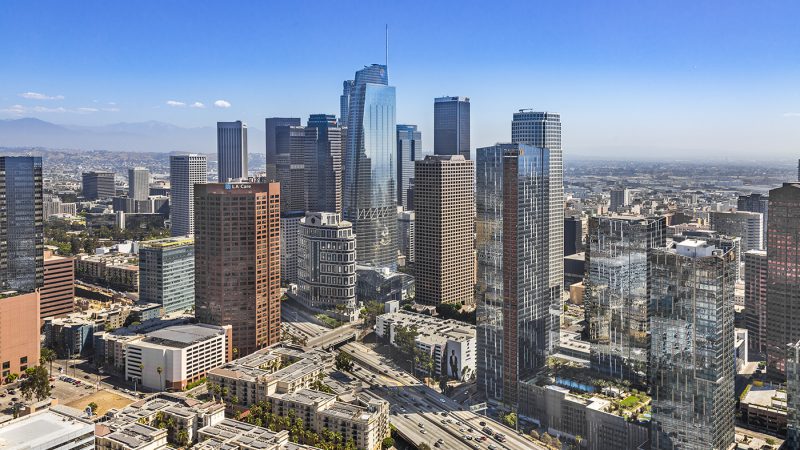 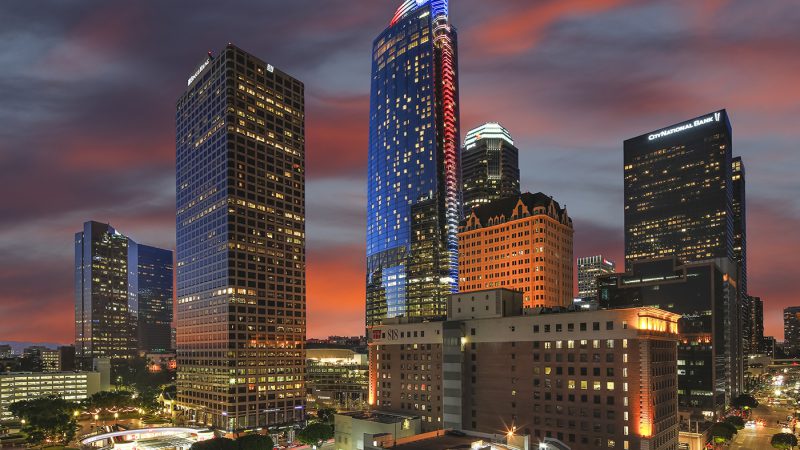 More About the Wilshire Grand Center

Architectural Style: Metamodernism—a set of developments in philosophy, aesthetics, and culture which are emerging from and reacting to postmodernism. One definition characterizes metamodernism as mediations between aspects of both modernism and postmodernism.

…Is the first skyscraper in Los Angeles without a flat roof.

…Is the tallest building west of the Mississippi.

…Generated nearly US $80 million in tax revenue for the city and county through construction phase and additionally US $16 million annually in tax revenue upon opening.

…Replaced a building with was deconstructed instead of demolished and many of the materials were recycled – resulting in US $4 million in recycling revenue that was returned to the project.

…Is built to achieve LEED Gold

…Will capture and recycle water for landscape irrigation and other non-drinking uses – the result will be as much as a 30% reduction in water usage.

…Holds the Guinness World Record for the Largest continuous concrete pour in history.*

*(In total, there was 21,200 cubic yards of concrete poured, weighing more than 82 million pounds. That’s the same weight as about 250 blue whales – the world’s largest animal. It took 2,120 truckloads to complete the concrete pour. If you lined up all of the trucks, that would take you from DTLA to Santa Monica. A pour of this magnitude required a total of 100,000 feet of polyethylene tubing. The rebar weighted more than 6.6 million pounds, the same weight as 82 big rigs. The concrete took a whopping 14 days to cure, helped by 60 tons of chillers, six water pumps and two 20,000 gallon storage tanks).

LAist: The Wilshire Grand Tower Is Officially The Tallest Building In The West!

The Wilshire Grand Center is an upscale world-class 73-story skyscraper in the heart of Downtown, Los Angeles.

Interested in leasing an office suite at Wilshire Grand? Take a look at our availability and contact our leasing office for further information.

Wilshire Grand has a variety of onsite amenities. Take a look at what we have to offer.

We are so excited to have InterContinental Los Angeles Downtown Hotel as a partner. It's sophisticated rooms offer Wi-Fi, flat-screen TVs, and coffeemakers.